In the years following, the Giant wheel loaders became very popular and the company moved to a larger building in Oisterwijk, the Netherlands. In 2010 moved to a new state-of-the-art production facility.

In 2011 the company decided to diversify and decided developed the first Giant compact telehandler, the Tendo 4548. In order to keep up with the growing demand for Giant loaders, a steel fabrication plant in Eger, Hungary was purchased.

After producing just as a handful machines in the first couple years the company kept growing fast and in 2014 the 10,000th Giant machine rolled of the production line in Oisterwijk, the Netherlands!

In 2014 the first compact utility loader (mini-skidsteer) was designed and introduced to the market. Meanwhile Giant loaders were sold in about 50 countries world-wide. In 2016 the company decided to open a 100% owned daughter company in Iowa (USA) after realizing that the huge potential for compact articulated wheel loaders in North America requires boots on the ground and skin in the game. In 2019 the first electric G2200E wheel loaders was introduced, paving the road for success in the ever expanding market for electric powered equipment.

Fast forward to 2020 and beyond: The company celebrated the production of the 25,000th Giant machine. We are confident the company will keep growing at the same pace based on our 6 core values. 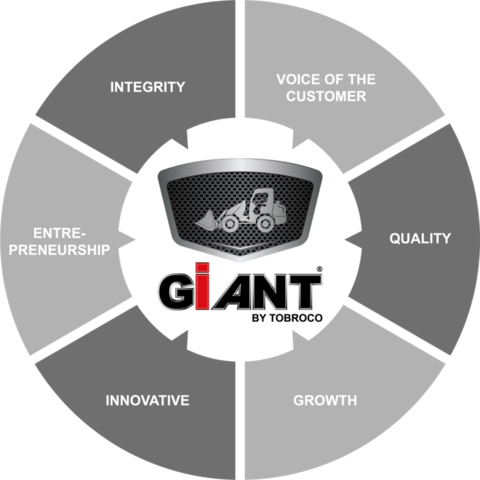 Tobroco Machinery LLC is the North-American distributor of multi-purpose Giant branded compact articulated wheel loaders, telehandlers and mini skidsteers. The Giant machines are engineered and manufactured in The Netherlands and have been widely successful in many markets including the landscaping & tree care industry, agriculture, municipal and construction markets. Our North American headquarters are located in Cedar Falls IA. Machines, parts & service support and training are readily available to dealers across USA, Canada & Mexico. Our machines are exclusively sold and serviced through an extensive network of professional state-of-the-art equipment dealers.

We’d love to hear from you.